Silenced by the pesticide industry?

In this newsletter: whitstleblower Valérie Murat's case in France, the ongoing glyphosate battle in the EU, and the (hidden) costs of pesticides on our health and environment.

Silenced by the pesticide industry: you can help

A brave French citizen called Valérie Murat. Her crime? She dared to raise her voice against the almighty French Bordeaux wine industry. She and her organization disclosed the presence of dangerous pesticides in wine with a "high ecological value" label. The wine growers’ association accused her of libel and won. Valérie and her organisation Alert against Toxins have to pay €125,000 'damage’. They appealed. Recently, the court ruled that they cannot appeal before they have paid. Outrageous! So please, click here to help raise this money and show the pesticide industry that we will not be silenced! 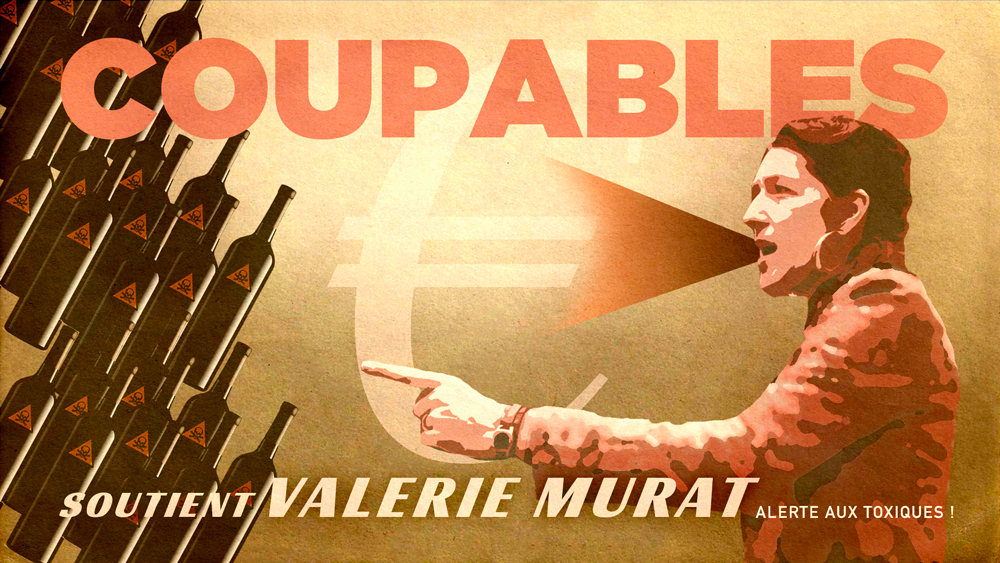 The battle to ban glyphosate is heating up

The licence to use glyphosate in the EU expires in December 2022. Producers like Bayer-Monsanto ask for an extension and institutes from 4 EU countries gave their green light in June. However, their methods are outdated and flawed. An independent review by specialized cancer researchers shows that the advice is based on a faulty analysis. Only 2 of 35 studies Bayer sent are reliable, 15 partly reliable, and 18 not reliable. "None of the most important knowledge gaps were addressed," says lead author Siegfried Knasmüller. The manufacturer has omitted studies using modern methods that show that glyphosate damages DNA in the liver and other inner organs. The test systems used in the Bayer research are more than 30 years old. "The models used in these studies detect only 5 to 6 out of 10 carcinogens," says Dr. Knasmüller.

In 2015, the International Agency for Research on Cancer concluded there is "strong evidence" exposure to glyphosate can cause DNA damage. But in 2017, the EU concluded the contrary and extended the licence for 5 years. "Now it appears that the EU is repeating the same mistake," Knasmüller said.

US courts found that Roundup probably causes cancer and Bayer had acted maliciously in hiding this fact. The company has since seen 125,000 lawsuits from plaintiffs who claim the use of glyphosate contributed to their non-Hodgkin's lymphoma. The company paid almost €9 bn in settlements last year and will stop selling the product to non-professional users.

In the past, the EU refused to publish the manufacturers' studies. This policy changed as a result of the "Stop Glyphosate" European Citizens’ Initiative (ECI) in 2017. A ruling by the European Court of Justice decided to lift the secrecy. For the first time, independent researchers could review the materials sent in by the pesticide industry. Now, the EU institutes must review their advice. A final decision on glyphosate will be taken by EU member states next year. After the successful call to end pesticides by the "Save Bees and Farmers" ECI, it would be a disgrace to prolong the glyphosate licence. A new battle is brewing and we will surely keep you posted. In the meantime, the new German government agreed to end the use of glyphosate by the end of 2023.

The agrochemicals industry is estimated to be worth $234 billion worldwide, and pesticide and fertilizer producers constitute a powerful political lobbying force within the EU and around the world. A recent investigation by DeSmog found industry giants such as Bayer, BASF, and Corteva have made significant efforts to influence the EU and its decision makers. Others, such as CropLife Europe and the Glyphosate Renewal Group, have been pushing the EU to continue to allow the use of certain controversial chemicals. The companies have had input in the policy-making process through a wide range of means, like membership of expert and advisory groups that give input on new policies, sponsorship of events attended by officials and other decision-makers, meetings with officials, and sponsorship of EU-focused media and events. 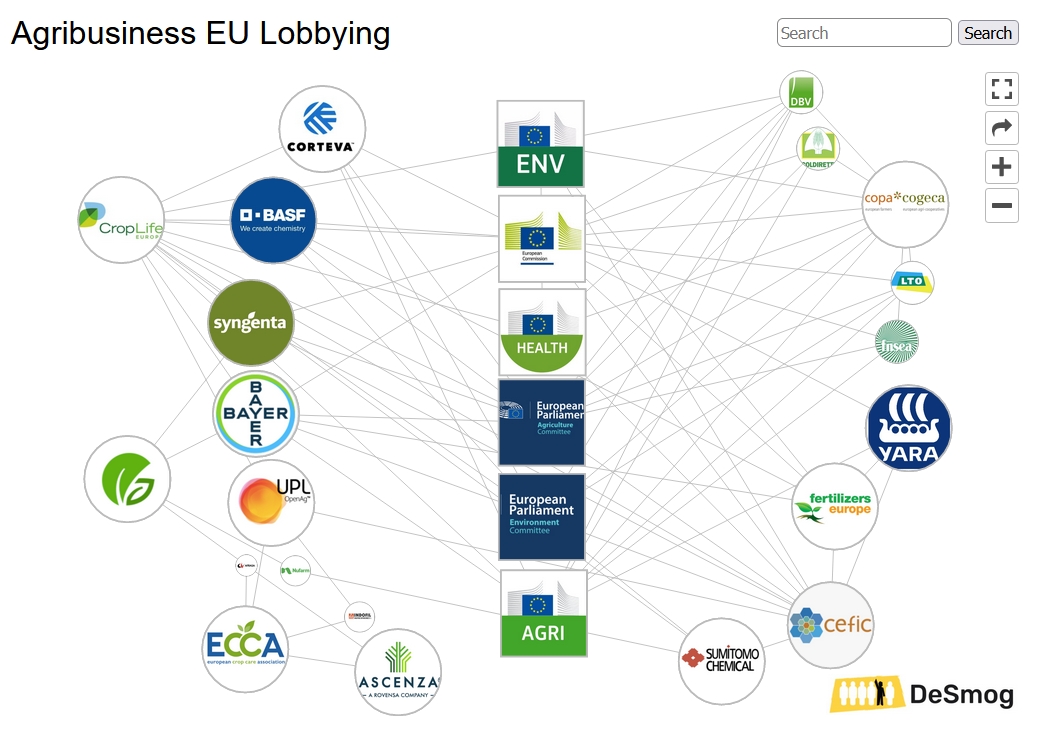 There is mounting evidence that long-term exposure to pesticides can lead to brain disorders like Parkinson’s disease. In France it is accepted as an occupational disease among farmers, and Germany is considering to do the same. The Parkinson Association in the Netherlands has asked their advisory body to look into this matter and it doesn’t look good. "Over 7 million people worldwide have Parkinson's disease, and it is the fastest growing brain disease in the world," says neurologist professor Bas Bloem from the Radboud University. He sees enough evidence that there is a relationship between the use of pesticides and Parkinson's disease. "It is bloody urgent! How do we explain to future generations that they got Parkinson because we hesitated to take measures?"

The hidden costs of pesticides

Over the last 20 years, the global pesticide market has doubled, reaching turnover of €53 bn in 2020 (US$60 Billion). This leads to huge profits fort the pesticide industry and huge costs for society. In the EU, the direct profits for the companies and their shareholders amount to €0.9 bn each year, while the direct costs for society are €2.3 Billion. Plus a huge amount of indirect costs included in support for farmers, water treatment, measures to counter biodiversity loss and healthcare. For more information, read the study "Pesticides: a model that’s costing us dearly," published by Basic, CCFD-Terre Solidaire and Pollinis. 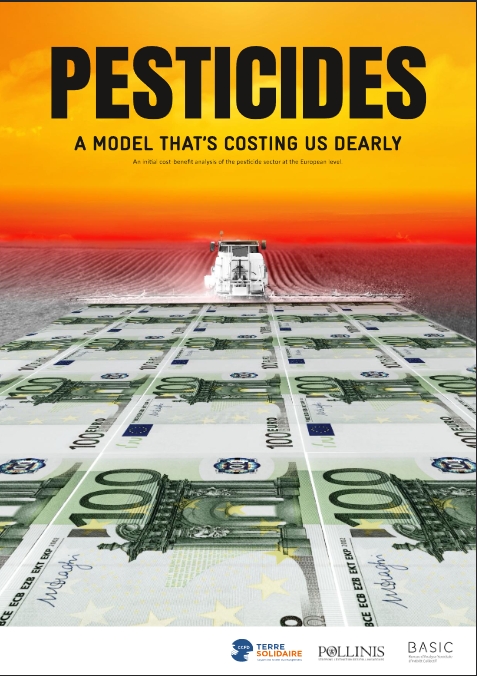 On December 3rd, civil society and indigenous people organizations delivered 187,000 signatures from 107 countries to the United Nations Food and Agriculture Organization (FAO) Director-General Qu Dongyu. They demand that the FAO ends its partnership with CropLife International, an association representing the world’s largest agrochemical companies (including Bayer of course). The global petition was facilitated by Pesticide Action Network, Friends of the Earth, SumOfUs, and the Center for International Environmental Law. Read more in the press release.

Towards a pesticide-free era – can you support our work?

We actively supported the successful ECI Save Bees and Farmers. In our vision it can be a game changer. If the EU moves towards a sustainable and pesticide-free agriculture, it will be an important and very necessary example for the rest of the world. The year 2022 will prove to be crucial, with the follow-up of the initiative and the discussion on renewal or ban of glyphosate. Please support our work if you think this is important.

All about the Stichting / Foundation Monsanto Tribunal
Tweets by @monsantotribun